"Where No Philadelphia Bed Bug Heat Treatment Has Gone Before"
At BedBug Chasers of Philly, our equipment and people make the difference in your Philadelphia bed bug heat treatment. Our proprietary BedBug Chaser is a patent pending, portable, safe, electric, green, convective heater designed specifically for bed bug heat treatment use and is the culmination of over two years of constant research and development. It was designed to be lighter, smaller and more powerful than any similar heater currently in the market. The BedBug Chaser incorporates lightweight aluminized steel construction and fully rated safe quick-connect load terminals. The unit is equipped with dolly style wheels, which will not damage floors and allows for easy mobility within the home. The heater is rated for continuous operation with more than double the BTU output than any other unit in its size range. 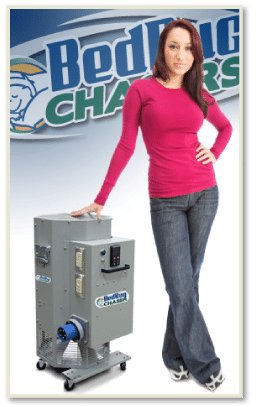 Our superior engineering and technology allow rooms to heat or “bake” much like that of a convection oven, which cook much more quickly and evenly than old-fashioned ovens. Convection is a combination of diffusion and the bulk motion of molecules. Near the surface of the object being heated (a sofa, mattress, clothes in a closet) the air velocity is low, and diffusion is how most heat is transferred, but deep inside that same object, the bulk motion is increasing. When heating an object, the density change in the outer most surface will cause the air to rise and be replaced by cooler air that again will heat and rise. Since the BedBug Chaser accelerates airflow on two axes simultaneously, it allows diffusion to occur at a much faster rate and creates a quicker density change on the surface of an object. More simply, the new design accelerates the convection process producing supercharged heating for the best bed bugs heat treatment!

BedBug Chasers of Philly is the only company using this ground-breaking heating technology for Philadelphia Bed Bug Heat Treatment. Unlike our competitors that use generic heaters, the BedBug Chaser was designed, tested and manufactured with the specific purpose of killing bed bugs by bed bug heat treatment which allows us to have the MOST EFFECTIVE Philadelphia BED BUG HEAT TREATMENT. We partnered with Avtron in Cleveland, Ohio to manufacture these heaters exclusively for BedBug Chasers. Their extensive experience includes making equipment for the aviation, industrial, commercial and aerospace industry since they opened their doors in 1953. With this alliance, BedBug Chasers of Philly has access to five production facilities in the US and UK and are able to manufacture heaters to support our global franchise network – no one else can do that! 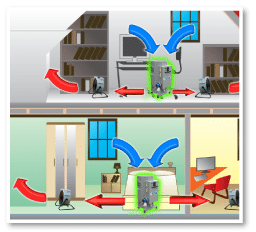 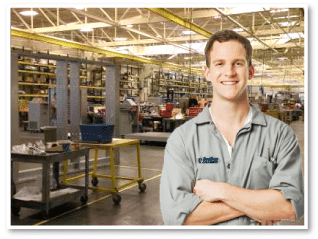 Treat NOW and Pay Over Time!